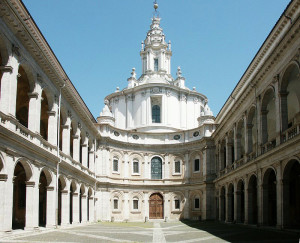 The altarpiece of the church, depicting St. Ivo Advocate of the poor, is a masterpiece initiated by Pietro da Cortona in 1660, and completed by his collaborators. The painting, which is large in size (8.25m by 3.75m ), shows clear signs of aging and is by now totally unreadable.

The intervention for the study and restoration taking place in the church itself is expected to last at least two years, and the restoration site will be open to visitors who will be able to follow all stages of the work.

In agreement with the State Archives, research will be conducted to find any existing documents concerning the history of the work of art and if necessary, they will also be restored. Contacts are underway with the proprietary institutions whilst at the same time looking for potential sponsors.

When women start to paint: woman artists in Rome from ‘500 to revolutionary time.

In collaboration with the Associations Artemisia Gentileschi e Metamorfosi.

The result of research carried out by Consuelo Lollobrigida, an art historian expert of the subject, has been and is quite surprising. In fact, an eclectic reality has emerged around the artists’ women, faceted and lively than they could imagine until a decade ago.

Accurate and thorough investigations are opening a new way of art in the sixteenth and seventeenth centuries of Rome, characterized by a vitality and feminine participation not dissimilar to the Florentine and Bolognese scenes.

This is therefore an exhibition, the first Roman exhibition entirely dedicated to the artistic production of women in Rome between the 17th and 18th centuries, and precisely the 1607, year of the official entrance of women at the San Luca’s Academy, and the year 1798, year of the Roman Republic.

Declined in the various pictorial techniques, in the various genres and in the various fields of application, we will discover, in addition to painters and weavers, an architect, several sculptors, and many women involved in the engraving technique. Some artists are Roman of birth, others of adoption, others still traveling in the capital of the modern age.

The exhibition will be divided in time periods, with the firm conviction that this work will constitute the first great repertoire of female art in Rome.

Negotiations and agreements with the entities are in progress

Masterpieces in S. Maria in Vallicella : the 15 paintings in the nave 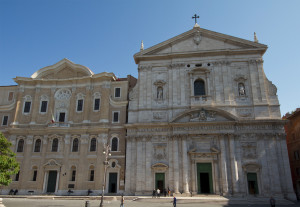 The nave of the New Church, in the heart of historic Rome, hosts 15 major masterpieces of the Baroque period. The paintings were made between 1697 and 1700 by master painters of the school of Pietro da Cortona and Carlo Maratta – Lazzaro Baldi, Giuseppe Ghezzi, Daniel Seiteretc – and they represent the salvation of mankind through episodes of the Old and New Testaments.

The project idea is to set up a restoration site within the spaces of the convent, which will be open to the public for the duration of the conservative intervention that will last three to five years. It will be possible to follow the restorers’ work every day, and admire these masterpieces up close for the first time. Once the conservative intervention is completed, the paintings will again be placed several meters above the ground.

Contacts are underway with the proprietary institutions whilst at the same time looking for potential sponsors.