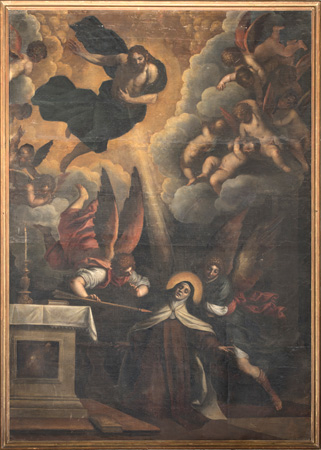 The painting in restoration, Palma il Giovane masterpiece, dated 1618, was realized between the Saint Teresa of Avila beatification (1615) and her canonization (1622). At the beginning, it was for the chapel consecrated to the Saint in the first Carmelitani Scalzi church, Santa Maria della Scala end then at the end of 1600 carried in the new church of the rank: San Pancrazio.

The picture shows the first representation of  The Ecstasy of Saint Teresa, so Bernini necessarily inspired to it for his masterpiece in Santa Maria della Vittoria realized after thirty years.

It is a great collaboration project between public and private that gets involved parishioner, with a partial fundraising thanks to the work of father Ernest Jan Zielonka; the art historian and restorer Giulia Silvia Ghia, Verderame progetto cultura CEO, no profit also gets involved about the coordination, logistics, setting up; the Max Planck Institute Fur Kunstgeschichte for the photos that will show the works and, at the end, Loveitaly for the crowdfunding, operative and necessary to conclude the fundraising.

The crowdfunding goes on with Loveitaly.